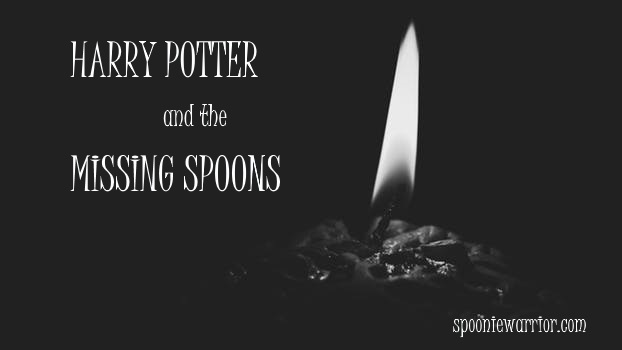 If you’re an avid Potterhead like I am, then you’ve probably heard of the new Harry Potter game, by Jam City, to hit the smart phone/tablet market. It’s called “Harry Potter: Hogwarts Mystery” and it has garnered some negative reviews based around one

While most people praise the game for its great graphics and compelling story line, players can’t get over the use of energy in the game and how long it takes to replenish it. Oddly enough, it’s the use of the energy bar that excites me the most, because it unwittingly offers an incredible metaphor for life with chronic illnesses and chronic pain.

For those of you who haven’t played the game, let me briefly explain the concept. In the game, you have various tasks and lessons to perform in order to move forward. Each one requires a certain amount of energy to complete. Once your energy runs out, you can either purchase more or wait for it to refill. One energy point refills every four minutes, which is painfully slow for many, yet all too familiar for spoonies.

In the game, most everything you do requires energy. Talking, listening, reading, turning pages in a book, contemplating, giggling, rolling your eyes, and even resting itself. To a non-spoonie, this concept seems ludicrous. And, yet, it’s the reality that spoonies live with every day. Nothing we do is free. It all costs us energy.

The other day, I had to work on filling out some forms for my disability claim. It took me around an hour to complete the handwritten forms, and I was left feeling dizzy, fatigued, and sore. It took me most of the evening to recover from that one task, just as many players have to wait more than an hour after completing one task before they have enough energy to complete another.

Players who are impatient and decide to take on new tasks before their energy bar has refilled, will see that it then takes them much longer to complete the task at hand, as they have to continuously break it down into smaller chunks as their energy depletes and refills. If I try to do something before allowing myself to recover, then it will take me much longer to complete the task, if I can complete it at all. That, or I burn through all my “gems” purchasing more “energy” until I’m finally tapped out on all fronts and forced to collapse.

There’s no perfect conversion chart either, not in the game or reality. On one task, reading from a book might take two energy points, while in other tasks it takes five. Sometimes you can get through one lesson on one energy bar, while other times it takes two or three refills. And you don’t always know which way it’s going to be going into it. I might think I’m feeling well enough for something, only to flare up halfway through, forcing me to stop (like the many incomplete blog posts saved in my draft files).

However, when it comes to replenishing the energy bar, gamers have the advantage. As said above, you regain one energy point every four minutes. Players can accurately predict just how long it will take them to have a full bar again. Yet, the same can’t be said about spoonies. Some days, I can rest for a couple of hours after doing an activity and then be able to do something else. Other days, one activity keeps me down for the rest of the day. And then there are the days when my energy bar doesn’t seem to ever fill up, not even enough for that two point eye roll.

Extending the metaphor a little further, the game also shows how wealth can give certain players an advantage over others. Gamers who are willing to spend cash on gems, can refill their energy bars as quickly as they please. The same can also be said about spoonies. That’s not to say that wealthy spoonies don’t suffer or don’t deserve our compassion, but having ample amounts of money does mean that they can afford better treatments, medications, therapies, and even assistants to make life with chronic illnesses that much easier.

Take Lady Gaga for example, who recently went public with her chronic illness struggles. This caused some people to say, “she’s sick but can still tour around the world, so why can’t you go to work?” While her pain matters and should be validated, it’s important to recognize how her position allows her unique opportunities not available to the average spoonie. Her assistants, on call therapists, personal chef, etc., all give her advantages over a spoonie who can’t work or aren’t as financially stable. She’s never had to go a month without her necessary medications because she can’t afford to buy them, or missed appointments because the copay is too high. In a country where the cost of living with chronic illnesses is astronomically high, it pays to be rich.

No matter your financial status, life with chronic illnesses, particularly invisible illness, is widely misunderstood. Many of us have been accused of being lazy, flaky, hysterical hypochondriacs. Compassion is rare, even within our own families. So, being able to draw comparisons between our reality and a popular game is important. It’s a chance for us to bring awareness into the realm of popular entertainment.

So, the next time you hear one of your “normie” friends complain about having to wait for their energy bar to refill, show them this post. Maybe it will help them understand a tiny sliver of what your life is like. And with greater understanding, the stigmas around chronic illnesses can finally begin to fade away.

And now my energy bar is drained…

Do you have another favorite metaphor for life with chronic illnesses? Leave it for me in the comments below! And don’t forget to subscribe so that you never miss a new post.