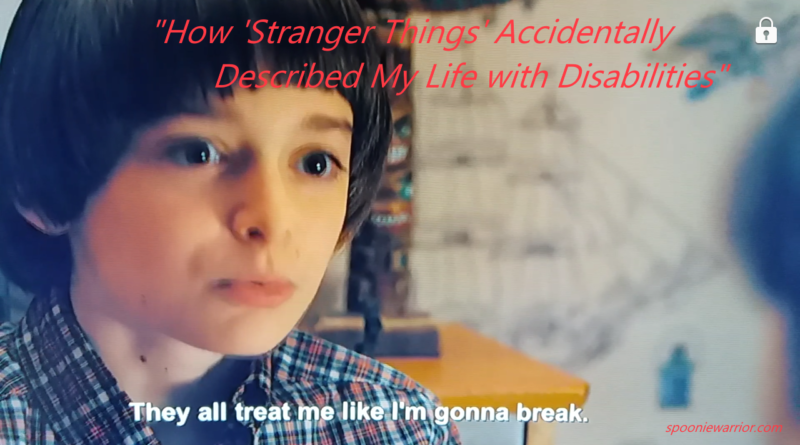 Don’t worry, there are no Season 2 spoilers for Stranger Things. I make no promises for Season 1…

The second season of the Netflix Original hit Stranger Things released yesterday. I just finished the 9 episode season about an hour ago, but this post isn’t about my tv viewing habits. Nor is it a review for the second season, as that show doesn’t really need reviews. My Social Media feeds are buzzing with people talking about it, so I’m pretty sure you’ve already heard some opinions. Or, if you were a huge fan of season 1 like me, no review will change your desire to devour the latest season with extreme glee.

Instead, I want to focus on one short exchange that happened around 35 minutes into the first episode. It doesn’t reveal any major plot points, however, it does reveal a distinct form of frustration experienced by many of us with chronic illnesses and/or disabilities. The exchange happens between Will (Noah Schnapp) and Jonathon Byers (Charlie Heaton). Here’s my collage of the conversation: 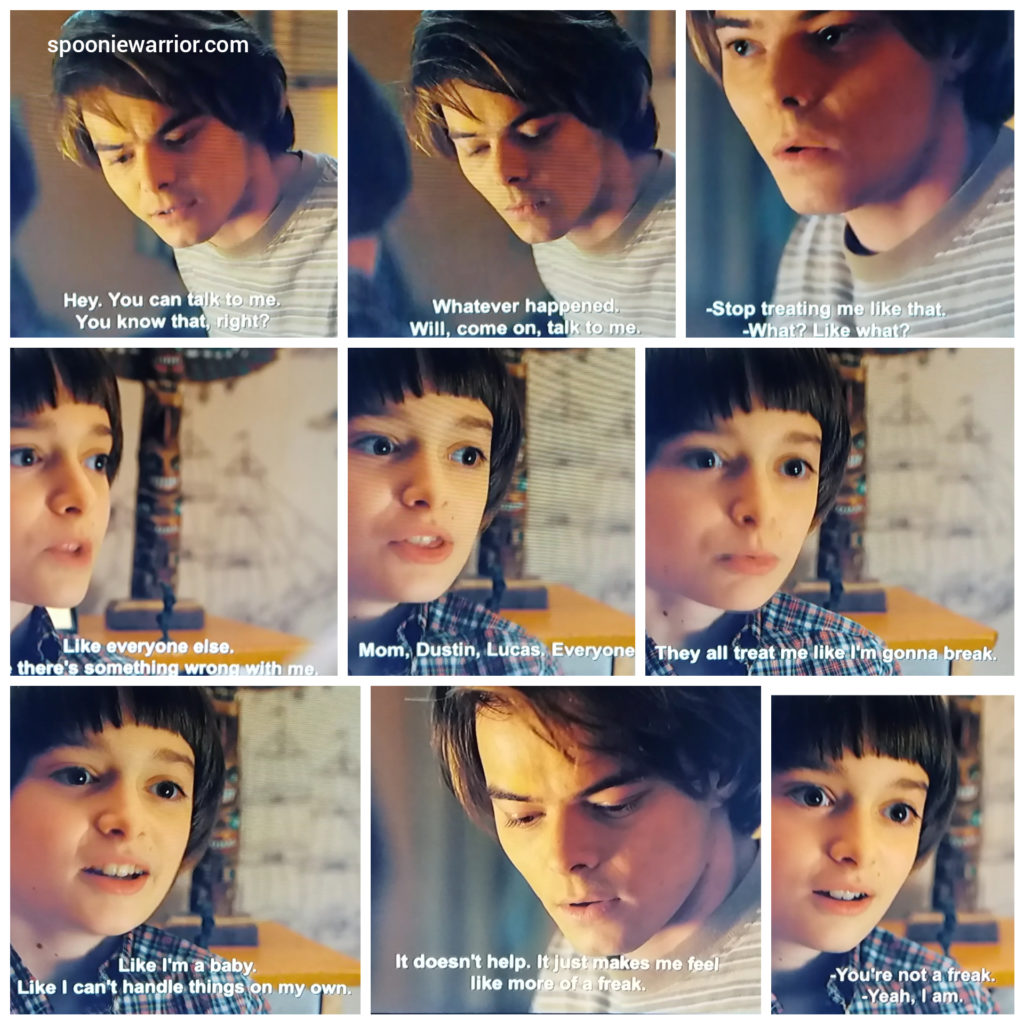 “They all treat me like I’m gonna break,” Will exclaims to his brother and my heart flip flopped. “Like I can’t handle things on my own,” he continued as I started clapping and whispered to tv set, “me, too, Will. Me, too.”

See, there are many people who just don’t know how to treat someone with chronic illnesses or disabilities. People that will talk to you like you’re a child when they notice your mobility device, or simply talk over your head to whoever is with you, a person who they assume must be your caretaker. There are people who treat you like you are made out of porcelain, refusing to let you attempt to do anything on your own, no matter how much you insist you are capable. They look at you with pity in their eyes as they shuffle around to surround you with a bunch of random items you don’t actually need, because they aren’t asking what you need. Instead, they’re running off of assumptions.

There are others who go to the opposite extreme. These are people who refuse to recognize that you have a disability, which usually results in them not considering accessibility issues, or not allowing you to do the self-care things you need to do to save spoons. These tend to be the-only-disability-is-a-bad-attitude kind of people, who treat us as if we’re lazy self-centered jerks for needing to rest, not being able to take the stairs, or any other kind of action we need.

“It doesn’t help,” Will goes on, “It just makes me feel like more of a freak.” Again, I found myself shouting, “Samesies!” at the tv. It’s not that these people necessarily have bad intentions. Yet, that doesn’t make their actions any less ableist and harmful. Often, they are just trying to “help,” but they are failing in that mission, and achieving the exact opposite results.

Treating me like I can’t do anything for myself, like I’m a child, makes me feel like more of an outsider to the world. Like I don’t belong. It makes me feel like maybe I really am weak and useless, a feeling I already struggle with daily. And, it leaves me feeling like I’m no longer me. I now have a giant neon sign flashing above my head screaming “DISABLED FREAK.” As if everything about who I am has been erased and replaced by this moniker.

Ignoring my disability completely makes me feel equally lost. Like my disability is something I’m supposed to be ashamed of or embarrassed by. When they pretend that my disability isn’t real and that I just need to push myself harder, I feel like I’m seen as an inconvenience for having needs that are different from their needs.

Whether I’m being babied or ignored, the main message is the same: they believe they know my body and my needs better than I do. I receive the message that something is wrong with who I am, and that I’m not good enough. I feel as if who I really am is fading away behind the expectation of who they think I should be. It’s like those dreams where your shouting out into an abyss, or sinking into quick sand while screaming for help but no one seems to hear you. It can begin to feel that, like Will, I’m in a world completely separate from everyone else.

Because of how those of us with chronic illnesses and disabilities are treated in this world, we have been told that we should accept this kind of behavior, not matter how harmful it is, because at least they have good intentions and aren’t trying to kill us off, like many others are. Except, these seemingly small or innocent offenses are what is at the heart of the movements that threaten the ADA, push to have children with Down Syndrome aborted as a ‘kindness,’ or scream that death is better than a life with disabilities. It’s these exact notions, that we’re lazy or weak burdens, that lead people to believe that we aren’t as deserving of the same basic human rights that are afforded to abled people.

Truthfully, just because we are treated worse by many people, doesn’t mean we have to accept any scrap of feigned kindness. We deserve to be treated with the same common human decency as anyone else. Accommodating for our accessibility needs should be as obvious and accepted as choosing a kid friendly restaurant for a mom friend, or choosing a coffee shop instead of a bar for a friend who doesn’t drink, or picking a restaurant with vegetarian options for a vegetarian friend. No one seems to think twice about avoiding an Italian restaurant for a friend’s night out because one of your friend hates Italian food, yet we get called high maintenance for requesting a place with wheelchair access and food options that won’t cause allergic reactions.

We deserve to have our needs listened to, and for abled people to recognize that they don’t have some secret magic power that let’s them know more than us simply because we are disabled. If I ask for an electrolyte drink, no one should respond in a patronizing tone, “oh, no, sweetie. Those are too sugary, they aren’t good for you. What you need is water.” Or, when I say I need extra salt, “that can’t be right, salt is bad for you. If you have a cardiac issue you need as little salt as possible, don’t worry, I’ll fix it for you.” No, Carol, those sugary sports drinks are sometimes the only thing that keeps me from passing out because of my difficulties with retaining electrolytes and fluids. And, Brenda, you better back up off of my salt because it is the only thing that keeps me from water waste. Trust me, we know our bodies and our needs far better than other person on this planet. We deserve to have our knowledge taken seriously.

So, thank you, Stranger Things, for so succinctly describing a sensation that is familiar to so many of us who live with chronic illnesses and/or disabilities. Sure, Will’s trauma and assumed subsequent PTSD are based around the science fiction world of the “Upside Down”, and he is never identified as either having a chronic illness (like PTSD) or disability (like PTSD). Yet, in this moment, I saw myself in his character. I felt strangely understood. I heard his words and found myself muttering, “Same, kiddo. Same.” And, for that small moment of representation, I’m grateful.